Co-Pays Are The Key To Collecting Everything

If you aren’t diligently collecting co-pays you probably aren’t doing well at collecting co-insurance amounts either. I’ve seen this over and over in practices. A lax attitude toward co-pays carries all the way through the billing process. Here are some important points about co-pays and some tips on how to ensure your staff becomes consistent at collecting them.

How Important Are Co-Pays?

A practice that is serious about getting paid will take every reasonable step to ensure that every patient who owes a co-pay, pays it. There are many reasons (maybe excuses) for not collecting co-pays. Doctors don’t want to feel as though they are pressuring their patients for money. Staff is uncomfortable having the financial conversations. Administration doesn’t want to add more burden to the front desk. And many other reasons. None of them really good enough to justify the failure to collect co-pays.

A lax attitude toward co-pays carries all the way through the billing process.

When handled well, co-pays are the key to collecting everything. There are some simple steps to make co-pays work for both patient and practice. Try these and watch your patients AND your cash flow respond positively.

Setting the stage for a successful and profitable practice starts with the simple fundamentals. Collecting co-pays is to a healthcare practice what dribbling is to a basketball player, or proper grip to a golfer, or threading a needle to a seamstress. Without these simple steps, the entire process will fail, and your practice will suffer in ways you may not recover from.

Set your practice up to collect everything by collecting co-pays consistently and completely. For more information, download our helpful guide to collecting more from patients.

Use this Guide 'To Collect Every Patient Dollar' 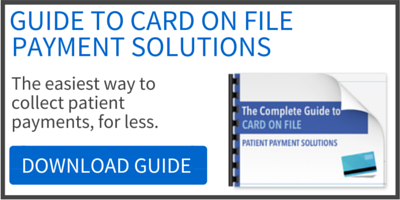